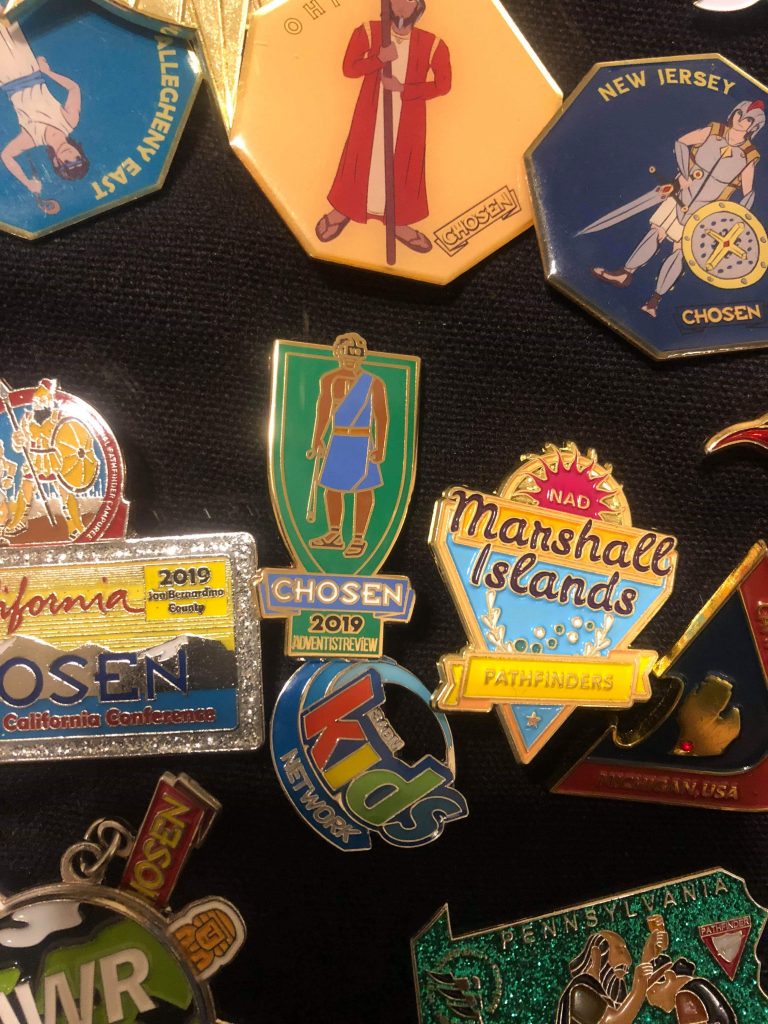 OSHKOSH, Wis. — The collecting and trading of countless pins at the International Pathfinder Camporee in Oshkosh, Wisconsin, has prompted an emergency clarification of the Adventist stance on wearing jewelry.

“It was insane,” says Gresham Griffins club leader Renee Taylor. “Spinning slingshots. Interlocking pins. Six-part sets. Some California club created one of the porta-potties. Even the GC president was strolling around, tossing out pins like the leaves of autumn. And one evening, after I’d just traded an Alberta pin for a spinning Bahamas Pathfinder club one, it hit me—Does this even count as *functional* jewelry?”

The camporee trading tradition started out fairly benign, remembers Greg Smalls, co-director of the Charlottesville Cherubs. “Back at Camp Hale, I was happy to get an Idaho potato or a Bermuda pin—you know, the kind of thing you might buy at some travel plaza. We didn’t have people bringing custom-made ones for every club, academy, conference, or church ministry.”

Mid-way through the camporee, church leaders called an emergency meeting of the Standards Committee, according to committee chair Oswald Marcus. “I’ve never seen such a scramble,” Marcus reflects. “Fortunately, almost every church officer was already in Oshkosh, so new guidelines were quickly voted, drawing on well over a century of folk Adventist tradition.”

The new guidelines are designed to spell out what has been long-established practice amongst Adventists, who believe that their lives and conduct should reflect both stewardship and humility. Says Marcus, “We’ve boiled it down to a single sentence: `If it’s on your clothes, anything goes. If it touches your skin, it’s a sin.’”

“It may not be exactly biblical,” Marcus reflects, “but it’s easy to remember, and it’s served generations of brooch-wearing grandmothers well.”

Special thanks to Tompaul Wheeler for the guest post.