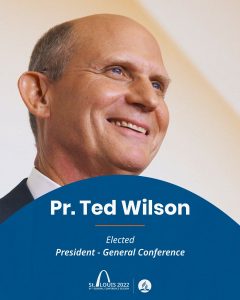 ST. LOUIS, Mo. — In remarks immediately following news of his re-election to a third term as General Conference President, Ted Wilson changed the 2022 GC Session theme song from “There is a place of quiet rest” to “I shall not be moved.”

Wilson said the replacement hymn far more effectively spoke to “the miracle of GC Session,” telling fellow incumbent leaders that “retirement isn’t a thing” and that the denomination would continue to “reject term limits and pineapple in haystacks” for as long as he was in charge.

In other news, an official motion to designate June 6 as the “second Great Disappointment” was defeated when it became evident that only a quarter of delegates were in favor of the calendar addition.