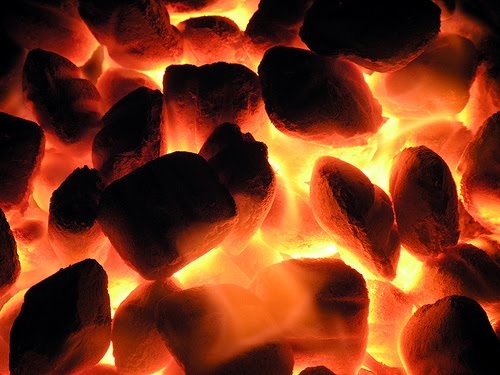 COLLEGEDALE, Tenn. — Pete Scalding, a 54-year-old Collegedale resident, was arrested in his front yard this Saturday afternoon after attempting to pour a tub of hot coals on his next door neighbor’s head.

“I was just bending down to clean up after my 6-month-old puppy when I saw Pete running straight at me,” said Harry Winter.

In a move that Winter said he hadn’t tried since his academy flag football days, he leaped out of the way just as Scalding dumped a tub of burning BBQ coals exactly where Winter had been positioned a split second earlier.

As Collegedale police took a break from vigorous speed trap construction efforts to investigate the incident, Scalding confided to the band of Neighborhood Watch enthusiasts restraining him that he was absolutely fed up with Winter and his defecating dog. He said that he had decided to “follow biblical counsel” to teach him a lesson about taking pit stops on his lawn.

Scalding, a determined defender of the most literalistic approaches to biblical interpretation, had a history of dismissing any attempts at discovering symbolism or imagery in biblical texts as “lazy Laodicean malarkey.”

“I saw him looking at me funny in Sabbath School this morning while we were discussing Romans 12:20,” said Winter. “I now wish the discussion leader had done a better job of explaining the context of the call to ‘heap burning coals’ on your enemy’s head.”