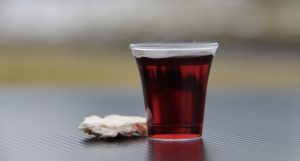 PARIS, France — A new convert has been given a stern talking to after questioning the flavor of communion wafers. Sans Saveur asked the question at a church potluck immediately following his first Adventist communion service.

Although Saveur said he was prepared for the foot washing portion of the service and the use of non-alcoholic wine, he said he was “utterly confused by the use of what can only be described as thinly-sliced American cardboard for the bread.”

Saveur said that considering the solemnity of the ceremony, “one would expect that the wafer would taste better, or indeed, that it would taste at all.”