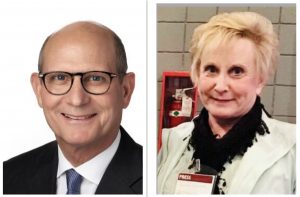 SILVER SPRING, Md. – “I think I’m speaking for everyone assembled in this auditorium today when I say Bonnie Dwyer is an Adventist treasure,” said General Conference President Ted Wilson, wiping a tear from his eye during an impromptu statement ahead of a GC morning worship session.

The GC leader testified to what he called the recently-retired Spectrum Magazine editor’s “years of fearless, independent journalism in service of the Adventist Church worldwide.”

Wilson said that Dwyer wrote “what many were thinking but did not have the guts to say” regardless of how many cups of Roma they had consumed.

“I’m not gonna lie, there were times when Bonnie made me mad, and I’m not just talking about our academy days together,” added Wilson.

“Sometimes I thought she could have gone easier on us in her editorials. And if I find whoever fed her team internal GC documents I’d fire them in a hot second,” admitted Wilson.

“But this isn’t about me, it’s about a terrific journalist who showed us tough love over the years,” he concluded, adding that in his upcoming retirement he looked forward to joining his local Adventist Forums chapter.