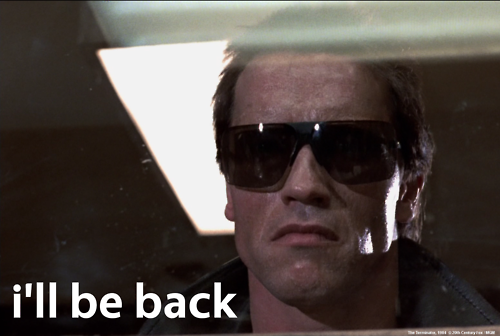 HOLLYWOOD, Calif. — In an exclusive interview with the Adventist Review, action movie star and former Governor of California Arnold Schwarzenegger acknowledged that one of his most famous catchphrases was inspired by a Mark Finley sermon on the Second Coming.

“A ‘Terminator’ scriptwriter and I were bored out of our minds so we went to a Seventh-day Adventist meeting in downtown LA,” recalled Schwarzenegger.

He said that Finley presented so powerfully on the Second Coming that he and his colleague were inspired to incorporate the message into their next movie.

Schwarzenegger said he was especially struck when Finley said the message Jesus has for us today is “I’ll be back.”

“We had a eureka moment right there and then,” said Schwarzenegger.

“We ‘hasta la vista’d’ immediately, drove straight to the studios and put the line in the movie.”