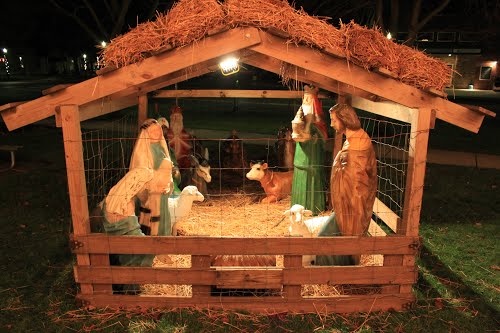 Red Bluff, Calif. — A wave of confusion and finger-pointing has hit the congregation of Central Adventist Church. Members in the know say it all started when traveling evangelist Fred Durbar visited and warned them about pagan symbols in their outdoor nativity scene.

Durbar said the five-point star above their set was definitely a pentagram. This disturbed several members, including an elder who immediately dispensed with the star. Upon further review of their nativity scene, some members felt strongly that the Madonna and child actually were fertility symbols or at the very least that Mary had been one before she gave birth. Because the said members wanted to avoid all appearances of evil, they removed Mary.

Joseph standing alone over baby Jesus in a wooden manger made for what an increasingly paranoid flock deemed “a creepy appearance without Mary” so Joseph, too, was removed. All that was left was the Christ child, but without the context of the other figures, it looked like a boy doll in a crate, with an angel standing nearby. After lengthy discussions it was decided to scrap the whole scene and put up a Christmas tree.

Head Elder Benjamin Buttonose shared his feelings on the demolished nativity scene as he stared at the tree, munching on a candy cane. “The Christmas tree brings us back to the simplicity of nature and you can’t go wrong with nature.”

Special thanks to an anonymous reader for submitting this story