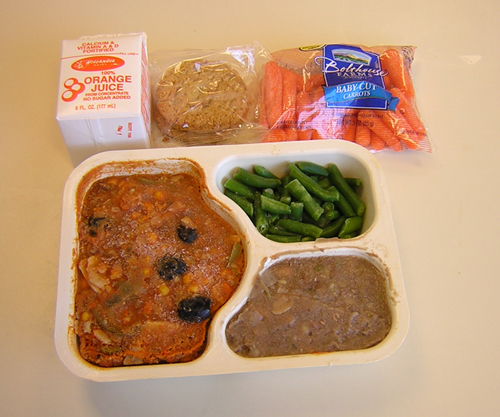 LOMA LINDA, Calif. — Student leaders at Loma Linda Academy have been desperately grappling with one of the biggest crises to hit the Southern Californian school in years: the quality of the cafeteria food.

“We’ve tried everything: formal letters to the principal; nasty looks at the cooks and some way-out-of-control food fights.  Nothing is working.  We can’t take it anymore!” said Student Association President Sarah Meyers.

Senior Class Pastor Brian Collie used a recent chapel talk to challenge students to draw a line in the sand.  “We have got to do something guys!  This is worse than time of trouble food.”

Collie called for all those who would do “whatever it takes to improve the caf food once and for all” to stand to their feet.  The entire student body stood up.

With students on their feet, Collie called for an all-night prayer vigil to address the crisis.  “We’ve tried everything in our power as human beings,” he said.  “All we can now do is pray.  We need a miracle!”

The response was immediate.  Student leaders leapt into action.  An official request was made for Loma Linda University Church Senior Pastor Randy Roberts, who has often visited the school, to lead the vigil.  However, his secretary said that he was unavailable and that regardless, “Pastor Randy always comes prepared with a sandwich when he visits the academy.”

Despite the setback, students pledged to continue working.  The vigil has been organized into groups with special break-out sessions for those who want to pray especially for specific parts of the Cafeteria experience.  “Lamentable Lasagna”,  “Terrible Tacos”  “Hopeless Haystack” and one group that is simply called “REAL Coke” (as in they would like some).

To up the ante, AP students are planning a hunger fast until things improve.  Said one frustrated Junior: “It’s not like we’re eating much now anyway.”

The prayer vigil is scheduled for this coming Thursday night as Fridays are a half-day anyway.

Quick Reminder for the Comment Section: Every post on BarelyAdventist is satirical. As in, the news story you just read was not literally real. The “satrically Adventist” tag and the “About” section make that abundantly clear. This blog is written by committed Adventists that believe that humor is a great way to discuss Adventist culture and issues. This it not a place for hotheads. Rude, judgmental comments or other attacks will be deleted. On the other hand, if you feel you can contribute to the discussion in a constructive and friendly “inside voice”, then have at it!