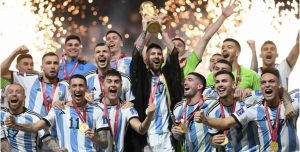 “Adventist or not, we simply cannot have any Argentines waiving their flags around this campus for the foreseeable future,” announced the French Adventist institution’s administration, adding that, although there was a chance they would have to see Argentines in heaven, they’d “rather not have to deal with them any sooner.”

To make up for the lack of visitation between the two Adventist schools, Collonges has launched an exchange program with Newbold College.

“It helps us focus on the bright side of things,” explained a school statement, “we thrashed the English in the quarter finals.”