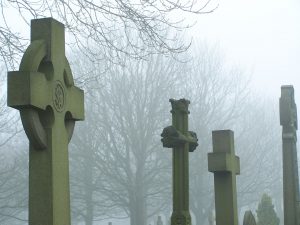 HOLLYWOOD, Calif. — Adventist insistence that the dead are in a sleep-like state and “know nothing” is driving movie studio execs crazy in Hollywood according to a lawsuit served to the Southern California Conference of the denomination.

“You guys suck,” announced a cover letter for the legal complaint. The lawsuit details the “mind-numbingly boring doctrinal stance Adventists take on a topic that can be mined to sell profitable films and multi-season series about zombies, contact with deceased relatives and do-over afterlives.”

The lawsuit demanded an immediate end to Adventism’s “irresponsible stance” on the matter, warning that while Hollywood is really hitting its stride in bring back dead people, doctrinaire stubbornness on the part of Adventists was wet blanketing progress.