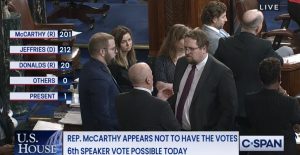 WASHINGTON, D.C. — Despite the growing chaos surrounding Congressional Republicans’ failure to pick a Speaker of the House, representatives have flat out refused to make their selection before the Adventist denomination officially decides to ordain women as ministers.

“We don’t care what happens to our approval ratings or anything else for that matter,” said Ohio Congressman Matt Redhat, “we gotta keep the main thing the main thing here and we aren’t giving an inch no matter how bad McCarthy wants this job.”

Florida Congressman Snuz Swampman added to his colleague’s comments saying there “isn’t much the House accomplishes even at the best of times so we may as well dig in here and make sure the Adventist Church rights an historic wrong before we pick anybody.”

In related news, Kevin McCarthy has been lighting up General Conference phone lines demanding an emergency ordination vote, offering to give personalized Bible studies “to anyone still determined to be a dinosaur.”