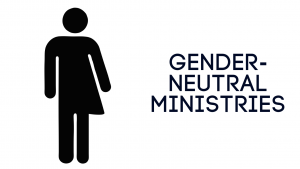 STOCKHOLM, Sweden — Segregated men’s and women’s ministries are a thing of the past in the Swedish Adventist Church. The old departments have been thrown out in favor of what the Swedish Union calls Gender-Neutral Ministries.

“This should have happened a long time ago,” said Swedish Union Director of Inclusivity, Vakna Wokeness, as he unveiled the brand new Gender Neutral Ministries Department logo to delegates at year-end meeting today.

Wokeness announced that, in the spirit of pursuing a gender-neutral approach to ministry, all Adventists book covers would be “old school Ellen White red” and devotionals previously specifically targeted at either men or women would be scrapped in favor of uplifting material featuring non-gendered pronouns and minimally-alcoholic kombucha recipes.

“I don’t want to hear another reference to dorcas ladies, that was already a downright pejorative term 30 years ago,” said Wokeness adding that the only acceptable term for an Adventist Community Services volunteer from now on was “Dorkus person.”

“If your congregation is full of traditionalists that can’t bear the sight of women wearing pants then the men will have to start wearing kilts to minimize gender divisions,” said Wokeness.