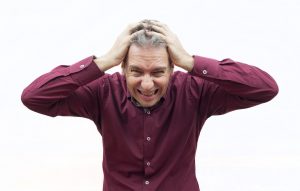 DALARNA, Sweden – Pastor Hans Glömmer’s life was thrown into disarray recently when he was transferred to a new territory with four churches.

Not only was the Sabbath morning commute killer but sermon preparation became that much harder as Glömmer could never quite remember which sermon he’d preached where.

Last Sabbath was particularly embarrassing as Glömmer opened one of his favorite messages with its attached joke only to realize immediately after the punch line that nobody was laughing because the congregation had heard the exact same “three guys walk into an ABC store” one-liner last month.

Panicking about the fact that he was about to preach the same sermon twice, Glömmer quickly re-engineered the service on the spot and announced the sermon time would instead be used as a time for member testimonies.

Although he just got away with his last-minute face-saving maneuver, Glömmer drove home after church acutely aware that his organizational skills needed a drastic overhaul. Also, he’d actually have to buckle down and write a new sermon.